Dennis Murphy is Australia’s leading exponent of Commedia dell’Arte, the riotous Italian Mask and Puppet Theatre that was the forerunner of modern irreverent Comedy. While he performs in both Mask and Puppetry, his real passion is for the Puppetry branch of the art.


Years of research and performing have enabled Dennis to adapt this 16th Century street-theatre to give modern Australian audiences a fresh taste of its intensity and excitement.


The old Miser, his comic servant Arlecchino, The Doctor, The Captain and a dozen other characters live again in shows that exude the instinctive vitality and joy that was the Commedia dell’Arte.


Presented at a wide range of events from the Sydney Opera House’s Festival of Cultures to Deniliquin’s Sun Festival, the shows have featured at multicultural festivals, art galleries, folk festivals and schools.


Dennis has toured to Australia’s Outback and even Russia’s Siberia where he was awarded the ‘Ural Citation for Excellence’.

Dennis has had the distinction of taking his Commedia dell’Arte Puppetry back to the land of its origin at the invitation of Italy’s prestigious TEATRI DEL MONDO FESTIVAL, Europe’s largest Children’s Theatre Festival.


Rossella Battisti, Theatre Critic for the national Newspaper, L’Unità, described Dennis as “one of the world’s finest glove-puppeteers”.


In Australia his Theatre-In-Education programmes have introduced tens of thousands of students to the marvels of Commedia dell’Arte. The NSW Department of Education has recognised Dennis’ work by presenting him with the Frater Award for “an Outstanding contribution to Theatre-In-Education” – a record seven times.


Meanwhile Dennis is constantly increasing his knowledge of Commedia dell’Arte, adding to his repertoire, developing his cerebellum and organising his cortex with a particular emphasis on maintaining the “fairground tradition of Puppetry”. 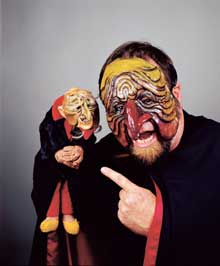 Italy's favourite clown, Harlequin*, launches himself into hilarious adventures and misadventures in a series of fast-paced, action packed comedies.

Bouncing off a cast of eccentric characters, Harlequin gets himself into and out of one ridiculous situation after another. Whether he is seeking his true love or a bowl of spaghetti, Harlequin can be counted on to entertain all ages – just as he's been doing these last 500 years.

*In Italy, Harlequin is known as Arlecchino.

When the Wicked Witch kisses Harlequin, he turns into a frog! If he can't get Columbina to kiss him, he will have to stay a frog, give up spaghetti and eat flies instead!!

Harlequin to the Rescue

The Princess has been kidnapped. Only Harlequin is brave enough (or silly enough) to attempt the rescue. With the aid of his Feral Godmother, he sets off on a rollicking adventure.

Harlequin is looking after Isabella's precious Puppy when it suddenly runs off. Now Harlequin has to pretend to be the puppy – and it's doggy shampoo time!!
(What a dog's life!)

Harlequin and His Magic Lamp

In this send-up of the classic Aladdin story, Harlequin is in terrible trouble (again!). The Devil is after him. The Magic Lamp is Harlequin's only hope. But will he waste his three wishes? Yes, probably.

To trick Pantelone, Harlequin puts on a wig and pretends to be his sister. But then Pantelone dresses up as his sister to trick Harlequin, and all is chaos – as usual. 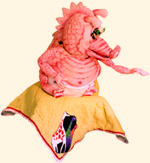